NOTE: This article is going to change a lot as updates happen for this device.

Back in the saddle

This device might just kill me. Almost three years since I first tried bending this device to my Linux-powered will and now its back on my desk for more masochist customization. This time around I won't be using the device as mobile daily driver but only as a companion device around the house. So I'm using the HP Envy Note 8 without its own data connection. So big FAIL No.1. Even so its just so close to that unicorn device that runs real Linux, within the 8" tablet size and has an active Wacom digitizer. Its now 2020 and I still haven't found anything better (beyond making my own, TBA). 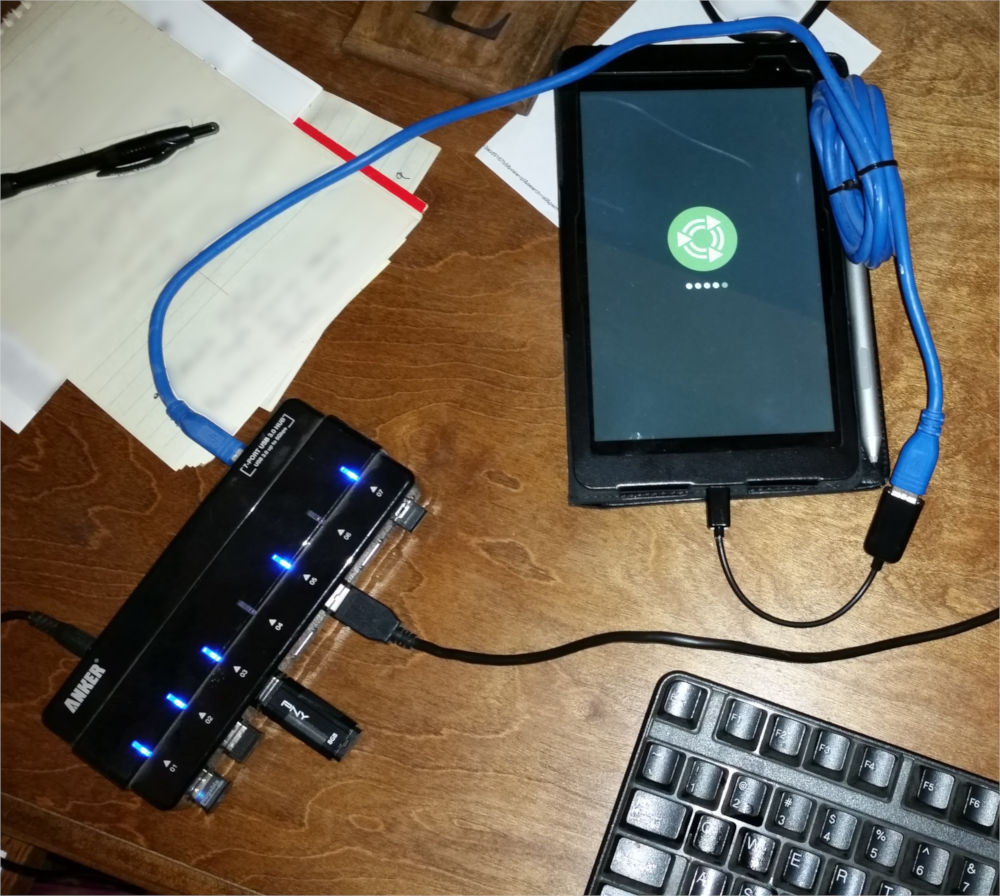 Because HP thought one port was a great idea?

Ubuntu MATE is better all the time

At this point, I think I've proven beyond a doubt that Ubuntu MATE is completely fine to use as a moble-ish operating system as most things can be relatively easy to modify. But its not without some out-of-box limitations. I was really disappointed to hear of the deprecation of the Mutiny desktop (e.g., no more mate-dock and HUD) post 20.04 LTS but there's talk of its revival using newer software, TBD. At the moment our device is running 21.04, with a 64-bit architecture. The RAM on this device is terribly under-powered and can only use about 1.8 GBs at any given time. The OS itself is pretty responsive but it can very easily get overwhelmed.

Another new gotcha is the transition from the older login to the new Arctica Greeter. The new login ignores any and all dconf-editor settings and one has to specially modify the gschema and recompile per arctica-greeter does not honor gsettings changes bug. I think this is strange and hopefully this is worked out before the next long term stable release. Upgrading to 21.04 from 20.10 it reset my schema value and I had to do it again. And again with the beta release. I've given up changing it over and over and just manually resize the keyboard with my finger for now. Ubuntu MATE news blog promises Arctica will obey dfcon-editor eventually(?). 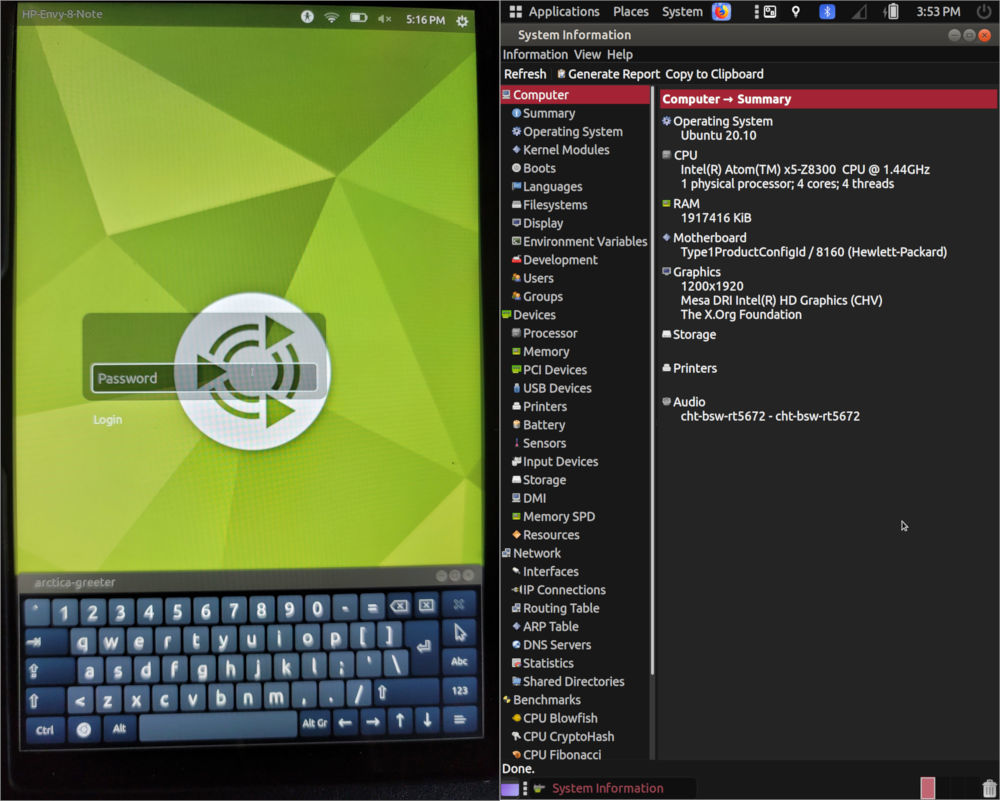 So this device uses Linuxium's CherryTrail/BayTrail insaller script to create a live USB for installation. Upgrading from 18.04 to 20.04 was simple and routine. However, in a gutsy and stupid move, I let the Updater take me to 20.10 and it went badly. Basically everything broke with: No OS installed in the extremely limited BIOS. After running BootRepair I hit yet another bad state: any USB live installer would fail, reporting the drive was bad. I had to do the following:

So I like pain and forced an upgrade to 21.04 from 20.10 to see what the new MATE Yaru theme was all about. Still prefer Suru++. Somehow X2go is crazy slow/unusable atm. After first reboot I noticed no 5gz wifi either. Thankfully another reboot and its back (?). Firmware says upgrades are possible which is interesting but of course nothing to actually upgrade.

The power indicator sometimes will indicate the tablet now charges while in use, which is a new benefit. Can't be sure if it actually is but I've been able to use it for about 5 hours with it wired in various states of direct use and idle modes. This has to be taken with a grain of salt considering how old the OEM battery actually is. Unsure how TLP is effecting power now with 21.04. Seems to be better and Suspend from within Power Settings seems to work as the Power button no longer asks to shutdown if suspended, yay!

This! Changed from generic kernel 5.9.x back to 5.8.1-050801-generic and also tried to install Hardware Enablement stacks but of course being on 20.10 prevented that. So far only one random reboot earlier today, might be related to the screensaver(?) so I put it on blank display instead of my preferred Pop Squares screensaver. The display is set to turn off within minutes anyway so not a huge issue - if the random reboots stop.

One thing that really continues to irk me is the hard-coded minimum window sizes in most Gnome default programs and various settings dialogs (MATE-Tweak, Appearance, mate-system-monitor, Signal, etc). This is on my to-do list, to dig into programs and change these limitations to be a bit more accommodating on portrait orientation with HiDPI enabled. I guess I'm about to recreate postmarketOS!

One of the first places I went after charging up this device after 3 years of storage was to the https://wiki.postmarketos.org/wiki/Firefox page for suggestions on how to optimize the universe's best web-browser. I realized other than a customized css file, I had already done most of the config tweaks they recommended for the Pinephone. I wanted a bit more so I installed a few additional extensions to make the experience more like the Android Firefox experience. This excluded the normal must-haves of Ublock Origin, Privacy Badger, HTTPS Everywhere, etc.). In no particular order:

chromium-browser: ERROR: not connected to the gnome-3-28-1804 content interface

In the past I was using a manually triggered rotate script from a taskbar icon when I wanted to put the device into landscape or portrait (annoying but reliable). I'm pleased to say I have the sensors able to dynamically rotate the device as its moved in real time. The issue is correctly assigning the correct desktop panel per orientation as there two: 1) for portrait (Familiar) and 2) landscape (Mutiny/Unity-like). Lots of trial and error with mate-tweak in this area as the naming conventions have changed since 20.04. Work in progress.

Automatic rotation: [Laziness being the mother of all invention] I, like many Ubuntu users, ended up using the Arch Linux Wiki's TabletPC for some ideas, suggestions and workarounds. Ultimately ScreenRotator was the solution, including proper invesion of the stylus which appears to be working normally. Once Ubuntu MATE's developers release the final form of the revived HUD/Mutinty/Mutantly(?) desktop layout I plan to revisit how to auto change the desktop panel for Landscape specifically. My only change to the ScreenRotator was to invert the icon for my dark theme.

One unfortunate side-effect of the auto rotation when using Barrier from my desktop, all input is backwards/upside down. This isn't really a huge problem though as most of my work using Barrier to share my clipboard and keyboard from my desktop to the tablet is dev/hacking/fixing so I don't really need the horizontal orientation - yet. TBD.

Sadly there was a kernel regression for Wacom integrated devices which I opened on the MATE bug tracker. Seemed like a regression back a few years when the integrated display thinks a stylus action is the same as a finger input ultimately locking up the operating system. This was marked duplicate for #1920682 and #1920632 also and effected Lenovo Yoga users and even some usb wacom device users. As a work around I jumped to kernel 5.11.8-051108-lowlatency using Mainline. This corrected the stylus hover, buttons actions and pressure sensativity worked again - the kernel seems super buggy. Crashes a lot (even as I was writing this sitting idle)! Hopefully linux-signed-hwe-5.8 package brings it back to normalcy without lag (as with 18.04). I've since downgraded to while waiting.

One of my deal-breakers is using the HP Envy Note 8's wacom features. After "fixing" the bug mentioned earlier, I noticed using MyPaint there was significant lag when drying to draw. This was a new issue too as I don't recall it from the 18.04 testing days. I ultimately change the Brush settings in a section called Dab per Radius down to 1.5. Additionally I also changed the Pigment setting down 0.0. This made the traditional artistic brushes usable again with only a small amount of line latency for long lines moving across the whole screen. Phew, close one!

Fortunately there is now a lot of information about possible missing device drivers which were completely ghosted back on 18.04. This includes things such as the Accelerometer, G Sensor, GPS, A-GPS, GLONASS sensor, Ambient light sensor, Proximity, Hall effect sensor and Gyro. At least the camera is being reported as a possible missing item now. Its all stuff I want to get working but will likely take herculean efforts by others considering its all related to drivers.