The First Tree is a widely known 3rd person, narrative-driven experience following a mourning vixen fox in an effort to find and save her vulnerable pups. A review I've been putting off because it hits so close to home. 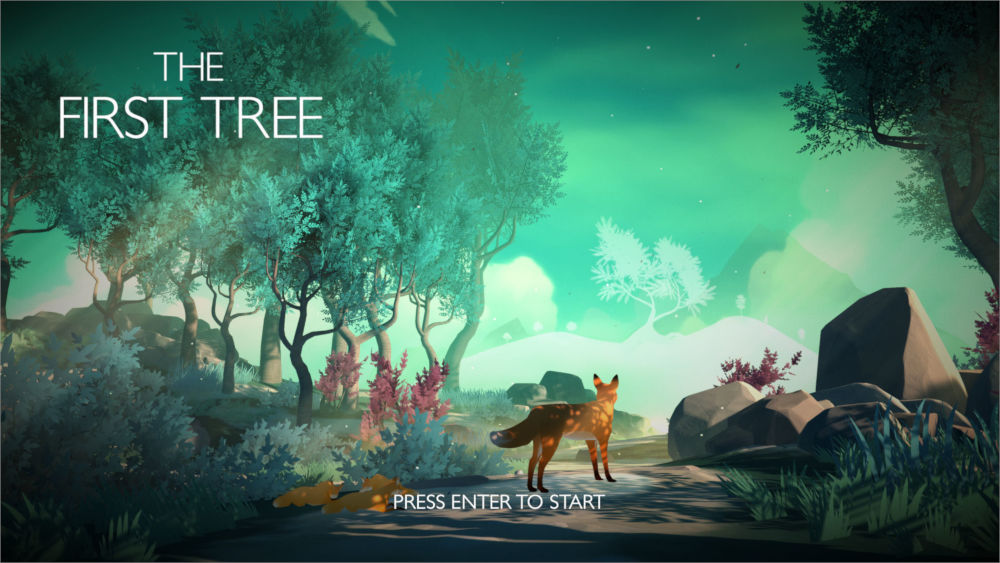 I'll say it upfront; I'm NOT usually a fan of hard-guided or strictly linear, interactive-click, or "simulator" games. Don't even mention turn-based games. I find the genres frustrating, limited and typically shows a lack of programming skill. The last great one I can remember playing was SPQR: The Empire's Darkest Hour (a MYST clone set in ancient Rome during the reign of Septimius Severus) circa 1996.

So I usually avoid narrative/voice-over games too but took a chance on The First Tree because of its many accolades in its teaser trailer. And it was heavily, almost shamefully discounted at time of purchase. And I really like foxes. You can read how I gushed all over Aragami here.

Surprisingly, you'll notice I gave this game a 5 start rating, the first and likely the only such rating for the foreseeable future. Why? Because a 5 star rating is well, perfection. And its not because The First Tree is a ground-breaking game in a technical sense. In fact, its well known that creator David Wehle used several other games as inspiration and reportedly relied a lot on a Unity game engine plugin called Playmaker (though this claim might be very much overblown) as he didn't feel he had the programming experience at the time, that he "suck[ed] at programming." That's real humility and I commend him for his refreshingly honest and open dialogue about his developer experience.

Another one of this game's lauded characteristics is its striking visual appeal. It certainly has a powerful color range that works very well with the emotional points of the story to great effect (think Pixar-level color story-boarding).

Now aesthetics mean a lot to me. I am not only a professional IT person (and one who loves video games) but also a traditional artist and art instructor (though I keep that content mostly hidden here at gripfastistech.com aside from my author box). But this game satiates the viewer in a way that most AAA games, special CGI movie effects and other genres within the Humanities (art/literature/film/music/etc) wish they could - but rarely achieve. A quick aside, be sure to check out The Fountain which I found to have some awesome parallels.

The aesthetic beauty, atmosphere, music and story-telling combine and elevate The First Tree beyond consumptive entertainment into the realm of fine art itself, raised up by its humanism and sensitive (and smart) metaphors. The experience you slowly build up to the game's ending is a moment of pure religious-like ecstasy. This is not something lightly discussed and as a devote Catholic myself, a sacred one.

For the unitiated or the skeptical, what is spiritual ecstasy? Webster defines it as "an emotional or religious frenzy or trance-like state, originally one involving an experience of mystic self-transcendence." It is a moment which is neither pleasure nor pain but something just off the mortal realm that few experience and many seek. Its the moment when "why are we here?" question is unexpectedly answered even if only for a fleeting moment. A question that everyone must face throughout and ultimately, cumulatively at the end of their mortal days. Your personal belief (or indifference) is actually irrelevant to the question as it exists outside of you as a mortal, rational creature.

Amazingly, a video game, this video game, secretly primes you for a religious experience that confronts a severe fact of life about loss and death and the cyclical nature of the universe. Beyond words and images, you are subjected to a loosening of your own emotive state, past and present, all at once - in complete sublimity. The cycle of life and our mortality confront us at first through the characters, then without knowing it, ourselves.

This moment of grace connects and binds you to a dream-like world that is both familiar and fantastical. Its a successful effort to make context believable and empathy genuine and real - even meta-real. Its the sort of game Roger Ebert never played that would have wholeheartedly changed his condescending mantra that "video games are never art."

This moment of religiosity can only be conveyed through aesthetics. I've read reviewers complain about the weird double jumping ability of the fox, or the short overall play time or whined about the narration or being annoyed at finding all the charms. I myself ran the game at a full 4K and had some strange stuttering issues about 2/3's the way through over a large rocky cliff and had to jump spam to get through it. But these annoyances and complaints miss the point, having missed the spirit of the entire endeavor.

Take a leap of faith and buy this game, and give it your all in complete open self-vulnerability. Search for the pups and for all the story's clues like you would a loving parent. You will be rewarded.

What draws you in is the beauty of it all. I don't mean beauty in the sense of something pretty, which it also is. I mean Beauty (with a capital 'B') as an aesthetic philosophy. Its the beauty that, to paraphrase Roger Scruton, "helps to fill that God shaped hole."

To those naysayers, I would extend this explanation via Scruton in defense of what David Wehle has so delicately and uniquely crafted:

Judgments of beauty are neither subjective nor arbitrary, and are a necessary part of practical reasoning in any attempt to harmonize our activities and ways of life with those of our neighbors. The creation of a neighbourhood, a place, a home, or any other settlement in which people of different occupations and views reside side by side involves coordination of a kind that only aesthetic judgment can reliably achieve. And that is why judgment of that kind exists, and why a rational being who has no grasp of it is incapacitated.

The First Tree's universe is a gateway, the colors used to convey the narrators' situation through color, light and darkness as previously mentioned. It is a tried-and-true method of storytelling in both the history of art and especially of good film-making and great games. David's experience in working in that industry is at once obvious. This method triggers and heighten memories and emotions of the gamer, however biased the gamer's memory is willing or unwilling to recall or simply remake their own personal truths.

Returning to the moment of ecstasy, those self-evident truths about your mortal life flash-evaporate under the unyeilding power of life's singular truth; that our time is fleeting and limited while love, its embrace and its healing powers are the means in which to survive the often brutal and alienated and sorrowful human experience. Our shared cultures would be wise to admit this truth - that all human life is special and sacred. And life is mostly a hardship, a struggle to survive and to find safety interrupted by brief moments of tangible security, happiness and joy.

I, personally have struggled through some unimaginable heartache in my life. Most of the themes and trauma explored in The First Tree have all been part of my story. You are likely to also have experienced many. Each of us by extension, are part of The First Tree's story - our forefathers are its roots, we are its branches and its leaves our children.

The First Tree stirred these emotional and traumatic events and if you give yourself over to the story being told (by searching for all of the magical, fairy-like and sparkling secret charms) not only will you have an enjoyable (and several-hours long) game but your story will be added to the human family tree. So too your heart.

You can keep up with The First Tree creator David Wehle at his official website and his indie game developer consulting project Game Dev Unlocked and of course on Twitter.

The original music soundtrack by Josh Kramer may be purchased from Amazon or enjoyed on Spotify. Like so much of John Williams' soundtracks, the music is gentle yet ever-present, and is as vital to the overall success of the game as is are all elements. Its a true case of the "whole being more than its parts." 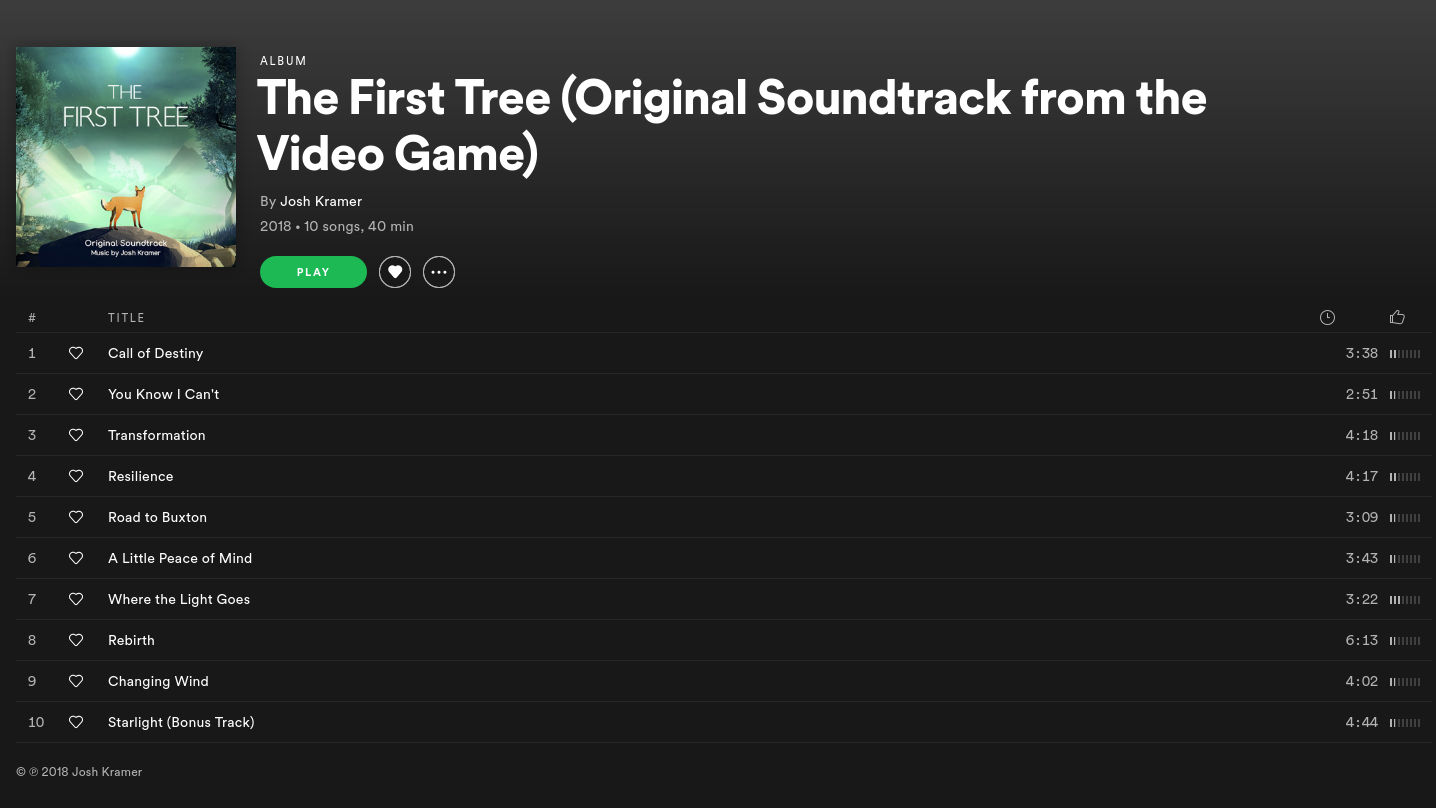 Do you have any thoughts or experiences to share? We'd love to hear them. And yes of course, this game made me cry uncontrollably for more time than I'd like to admit, a first for a video game. 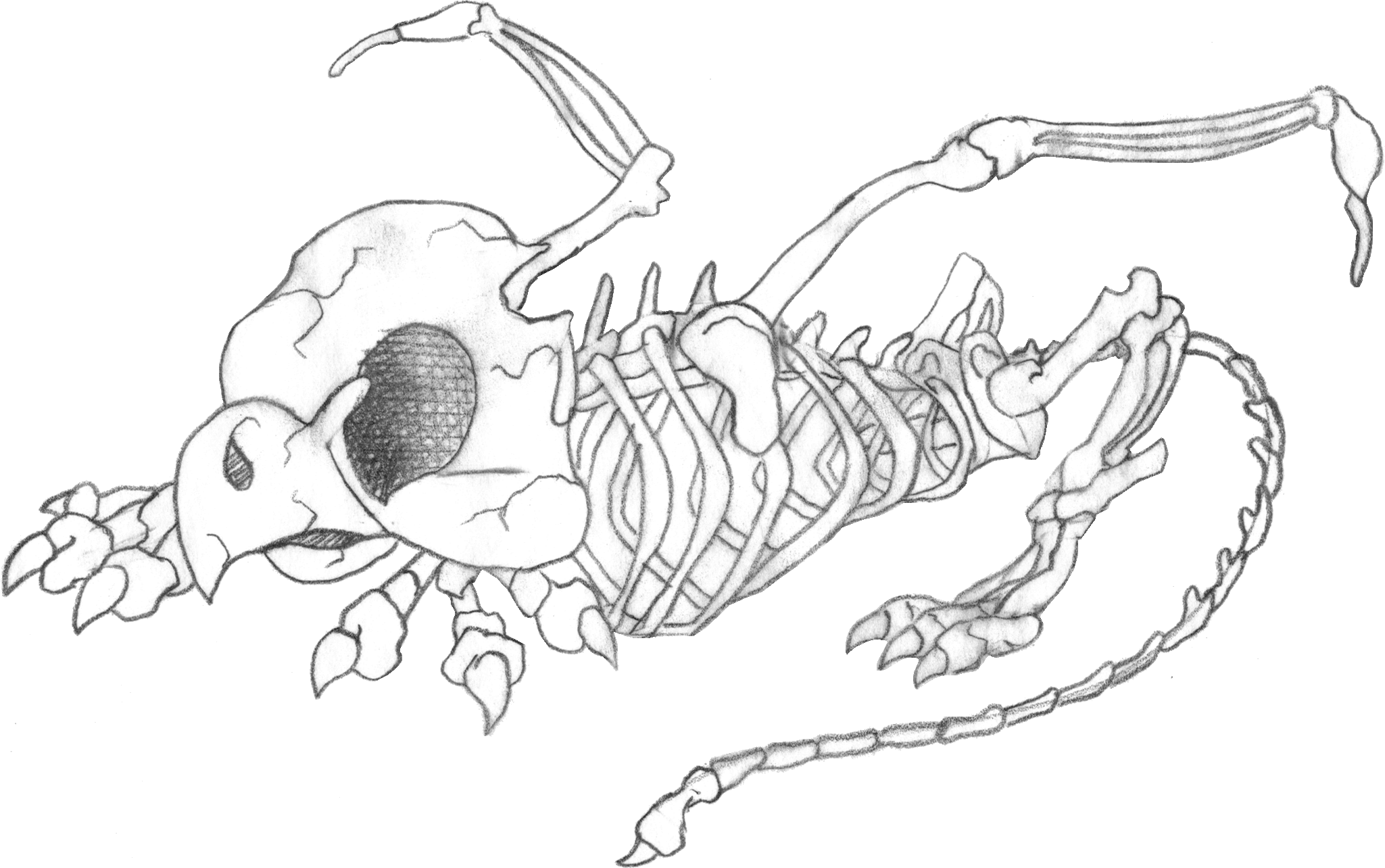