A well-known, highly rated and well crafted horrific-all-war-is-hell 3rd person shooter in the grand Apocalypose Now tradition by means of Gears of War and Army of Two. Its been almost year (or more) since we played this game and here are our final thoughts: kill fucking confirmed.


Quick Con Summary: Felt short for playable hours, some NPC relationships are quite unimportant without true purpose. The last 5 minutes of the story becomes wholly transparent 4 minutes too soon. There are limited "other options" during specific Pyrrhic scenarios. Replay value is extremely low but the ride is fast and furious. 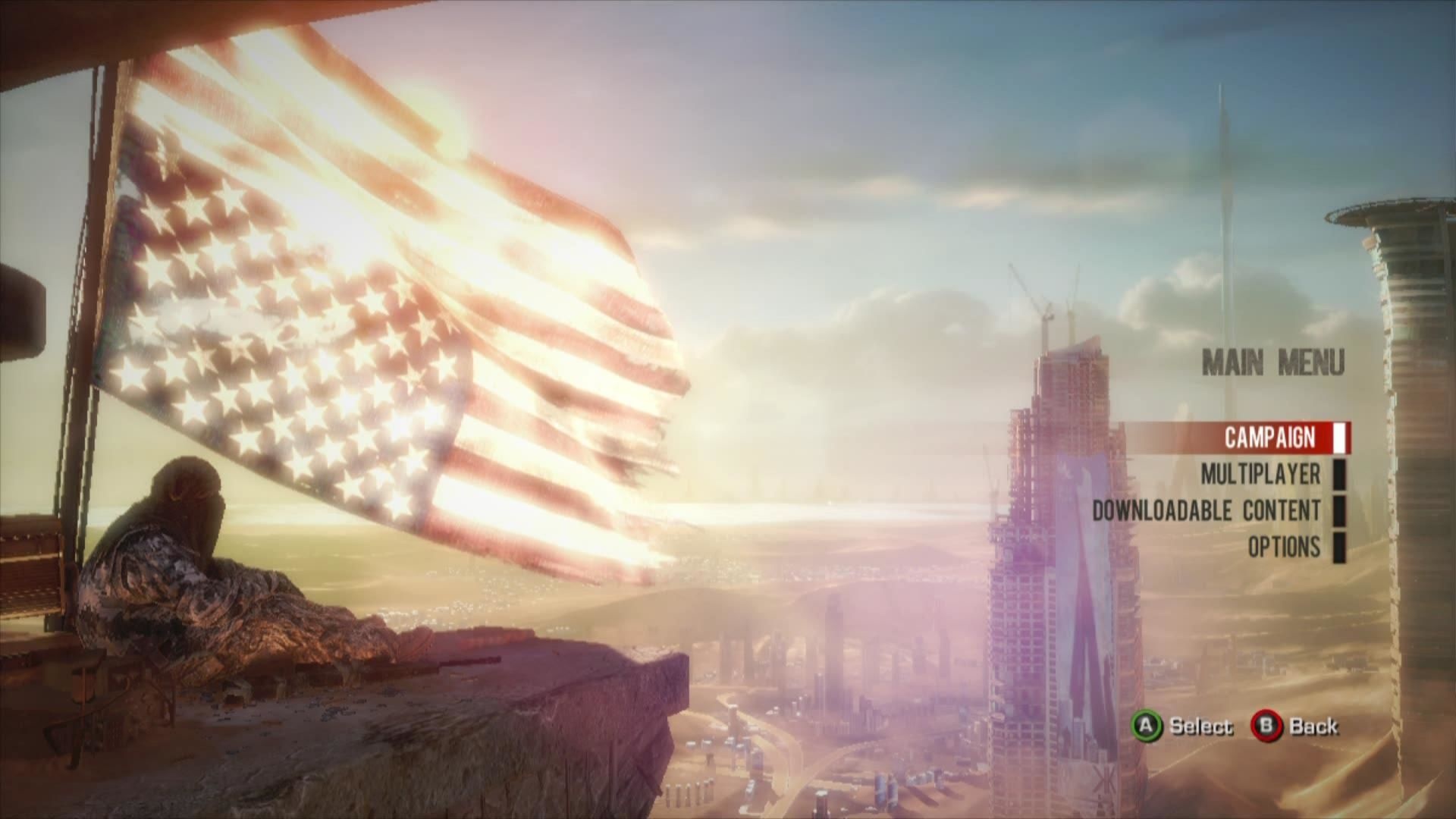 As Walker, the commander of your 3 person Delta recon squad, there is a certain no-holds-bar-grab-the-world-by-the-balls mentality that starts from the outset and as a player you know immediately that this isn't going to end well. Walker's eventual slide into chaos both literally on huge waves of Dubian sand and within his own mind is inescapable; he/you are overwhelmed by PTSD as the campaign extends itself beyond all hope. According to Cory Davis ala DigitalSpy's Andrew Laughlin interview:

The scenarios in Spec Ops: The Line were chosen in order to provoke some specific questions and emotions in the player. We invite the player to encounter some of the more horrific experiences that we hear from soldiers and the stories they tell as they come home from modern conflicts. These are not happy or heroic scenarios, but we feel they are important because they cause us to question ourselves, our way of life, and our way of thinking. We feel that it's extremely important to treat these themes with care, and we use them as an emotional tool in our narrative, rather than for shock value.

You won't regret buying this game and like so many other game reviews of Spec Ops: The Line you will find yourself revolted by the in-your-face brutality and no-F's given situations the player [you] will confront. We knew the developers (Yager Development/2K Games/Take Two) actively sought to push the player beyond simple moral dilemmas and into real-word, no-win nightmares. In other words, this is how war actually is; things go wrong, luck is big part and American tech doesn't automatically mean victory. 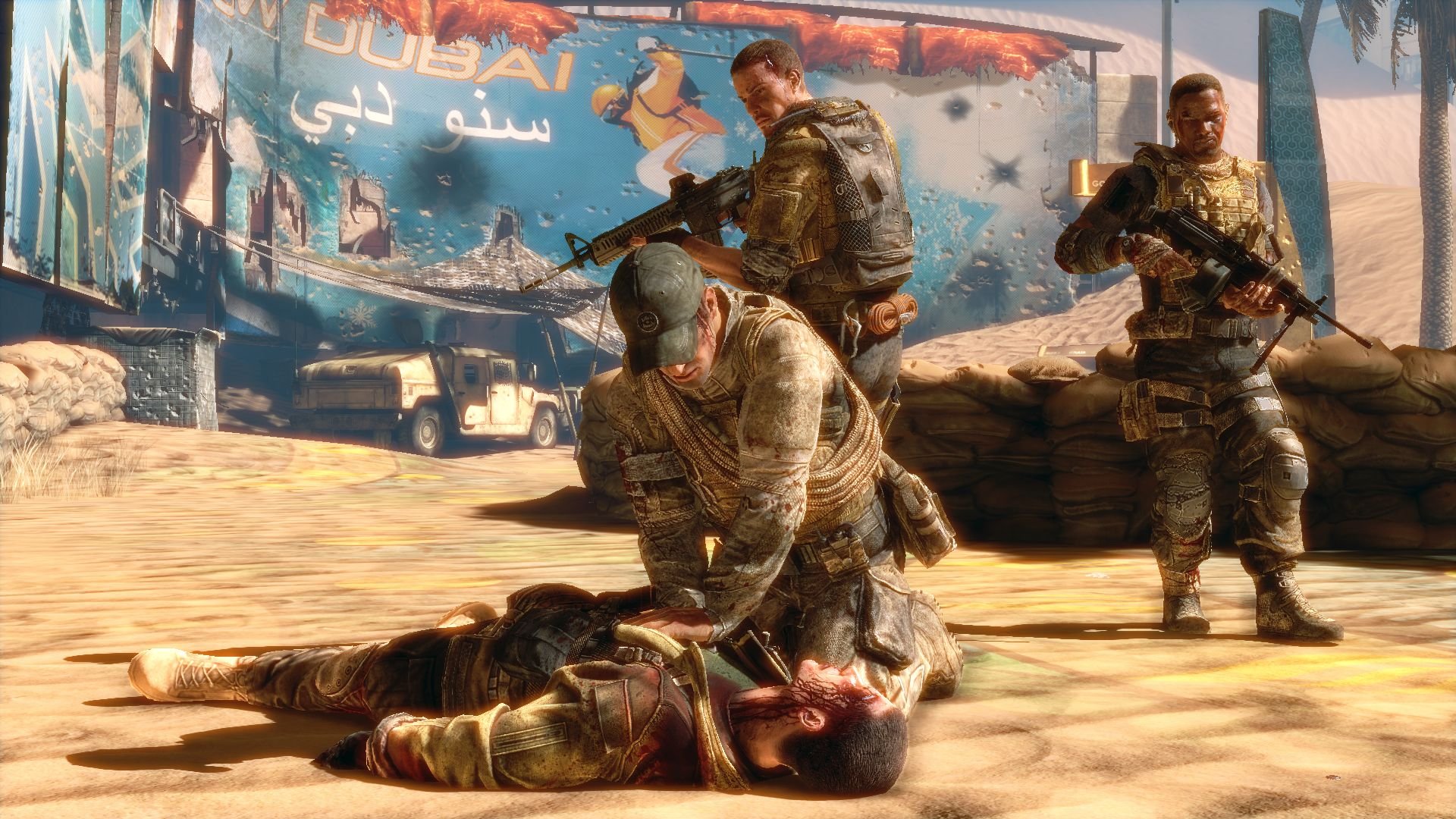 Things do go wrong...badly and there will be blood.

The desert is a big part of the story and according to aricles at polygon.com and many others, sandstorms are particularly dangerous things. Dread inspiring. But not really? We never feared the forces of nature like the developers describe like we feared General Raam's nightmare swarms of wild Krill or Aragami's instant-death Soliders of Light or the first time we faced off Mr. Freeze in Batman Arkham City. Its not quite fair to talk about games that came after Spec Ops: The Line but we need to be completely honest in our actual experience when we were utterly terrified of enemies in games.

Remember that first time you rode Indiana Jones at DisneyLand and saw the giant ball? Yeah, not so much in this game. The sandstorms can't be ignored either but you deal with them in a largely robotic manner. Fortnite's storm is the same thing. Move to checkpoint, into a building, shoot a window, etc.

If you are looking for Master Chief you won't find him in this game and that is its true strength. You won't find a college-roomie bromance or aloof idealism but a hyper get-your-hands-bloody experience. Sure you use a sniper rifle but your assault rifle butt is sometimes just as effective to bash someone's face at the end of the day when you ran out of ammo (and you will).

There are times where the action actually seems to make fun of other 1st/3rd person shooter games where the characters are really enjoying what they do, killing hundreds in over-the-top Die Hard sequences. At one point Walker actually demands a sequence like this and you nearly fall in love with a heliocopter's minigun. "Take it baby!"

On a serious note, this game was released 11 years after 9/11 and the American audience may enjoy abusing and/or killing the native Muslim population. This only adds to the perversion of the game's moral questions and its hard to believe Islamophobic revenge was unintentional by the game developers. That being said, friendly fire upon American soldiers is not and cannot be avoided either. Characters voice objections in both situations. Tough decisions are made. Its you versus them and it doesn't quite matter who them is in the struggle to survive. 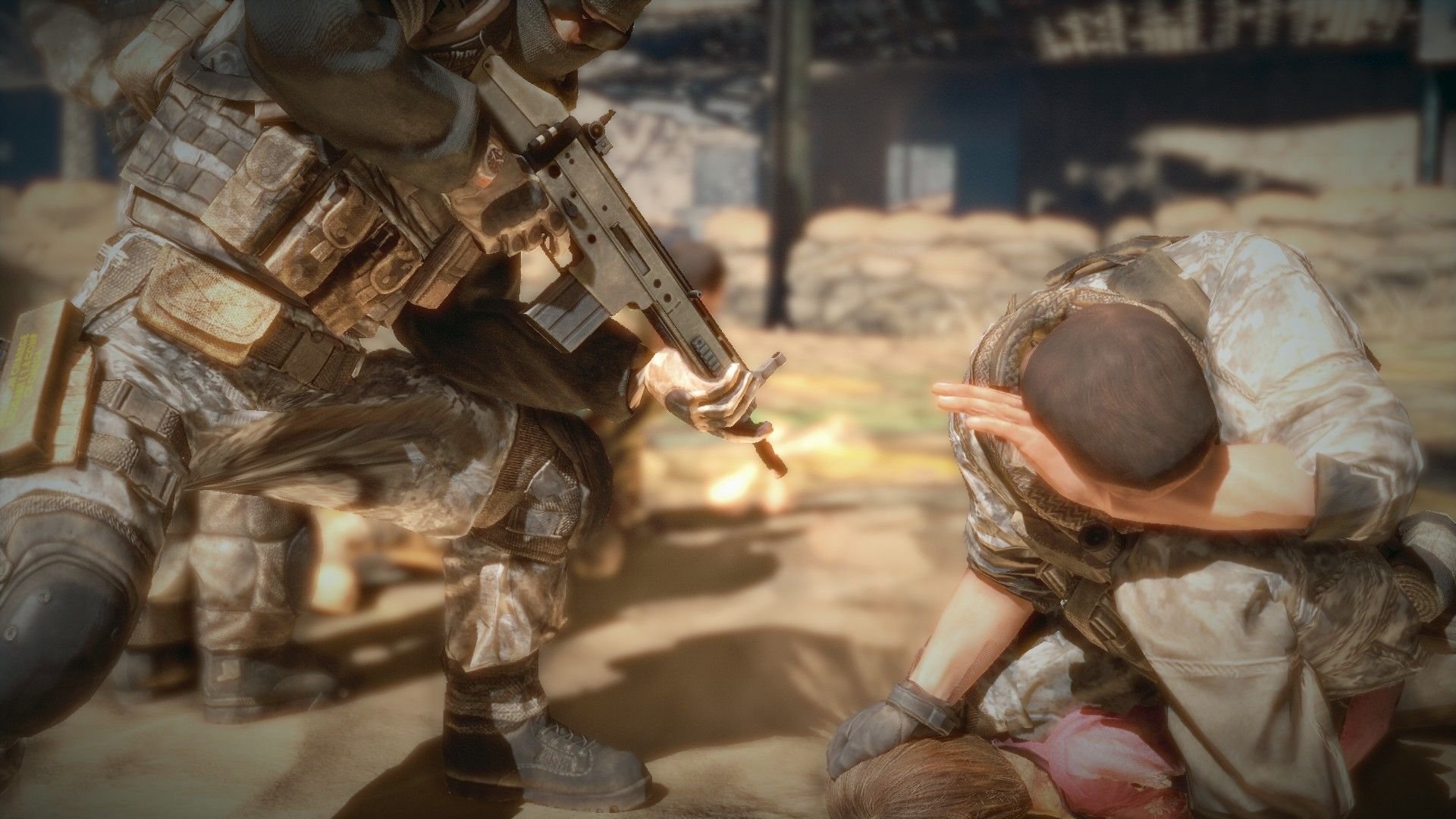 Enhanced interrogation techniques are the least of your concerns.

The narrative design of the game is quite interesting and Wikipedia has a fascinating summary of the ideas behind the story. Further, the developers comments in interviews are even better. We encourage you to review the primary sources for the bigger picture: https://en.wikipedia.org/wiki/Spec_Ops:_The_Line#Narrative_design. 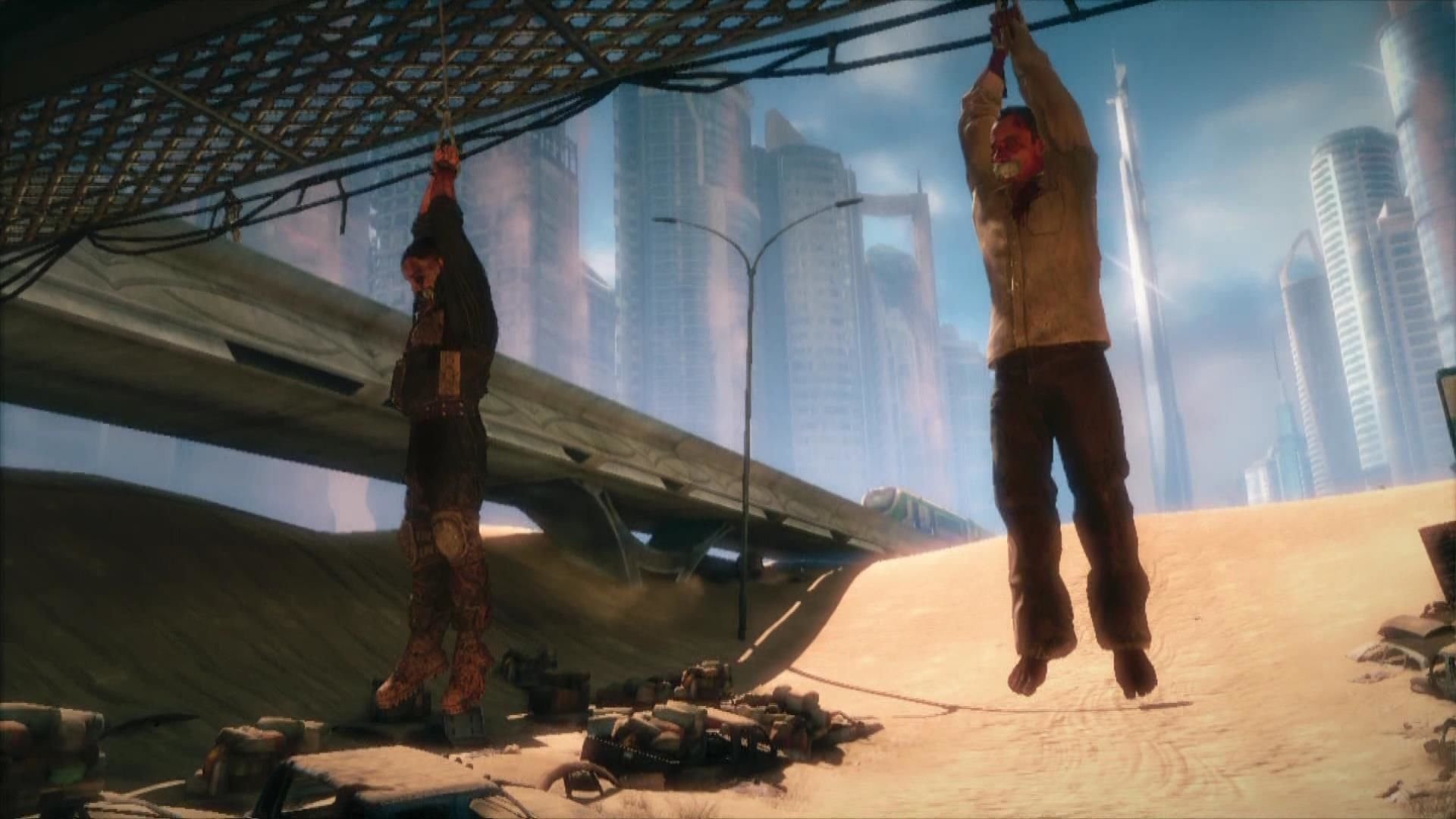 When we think back to our experience of Spec Ops: The Line we really wish we could have chosen/forced alternatives rather than the binary choices (just like in Army of Two's The 40th Day) presented to us (see image above). Sure, a few quick choice situations, just like in war, demand immediate action without hesitation and we get it - but at times Walker could navigate around physical and mental obstacles in a lighter, more recon style manner.

We kept trying to bypass the more obvious traps and when we actually succeeded the result seemed to be the same irregardless. In other words, there's no wiggle room for Batman to find another way and we still can't come to a conclusion if Walker and company is better for it - or not - if its all in his head - or not. There's absolutely no middle ground, to use a term from the Fallout series, "sneak-mode." Spec Ops: The Line is all brawl just like Ares wants it.

Its hard to review a game like this without spoiling it entirely. So go buy the game on Steam for Linux and just experience it yourself and like us, many moons after keep thinking your thankful you made it out alive...