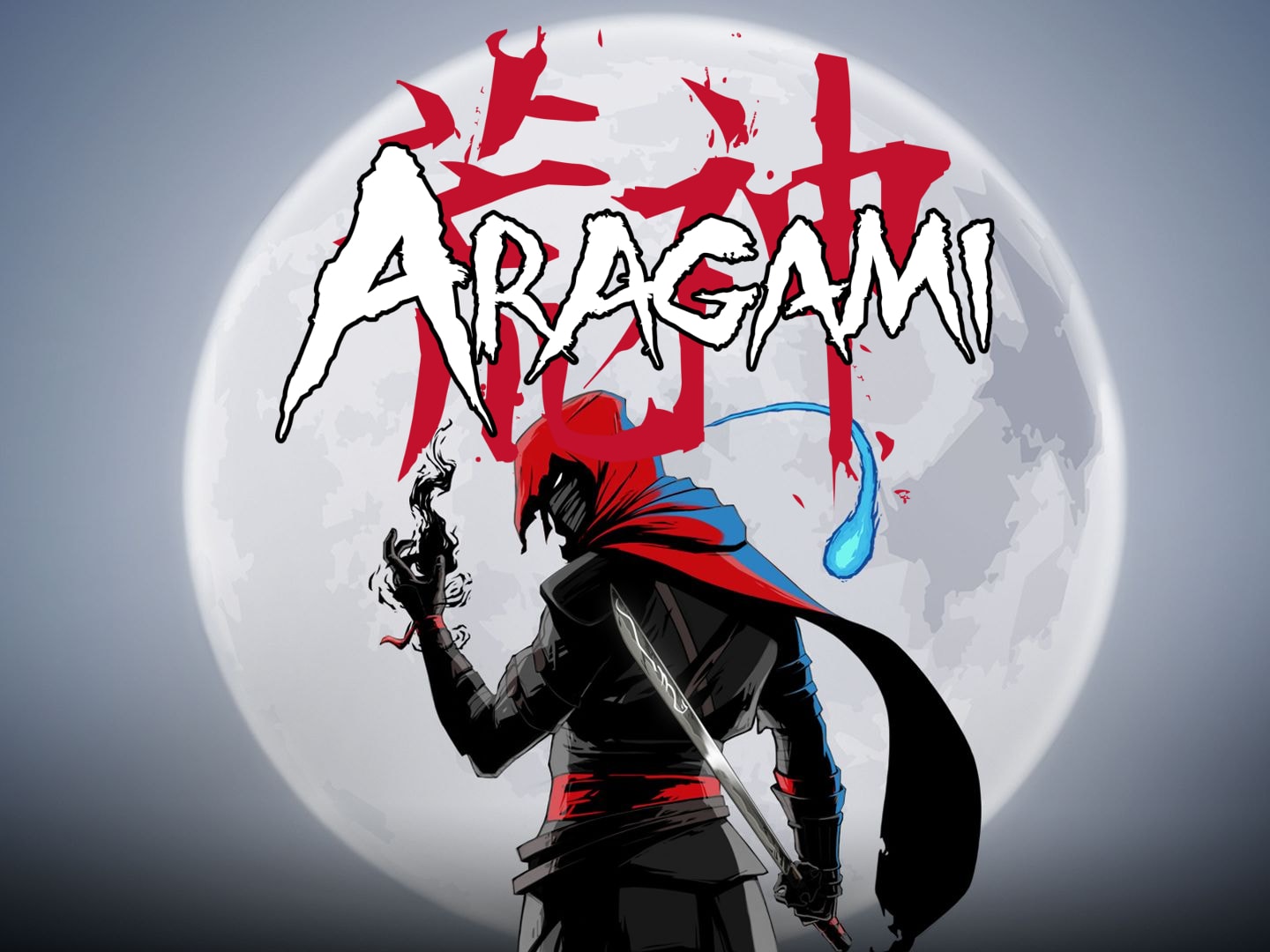 Aragami developed by Lince Works and released in October 2016 is a complete commercial follow-up to their "Path of Shadows" student demonstrator project. The game was built using the Unity 5 game engine and is inspired by several other sneak-and-stabs including (according to the devs) Journey, Tenchu and of course Mark of the Ninja. As a player we strongly felt there were [aptly inspired] elements and mechanics from old-school Ubisoft's Tom Clancy's Splinter Cell (slower pace) and RockSteady's exceptional Batman Arkham series (predator mode); the game feels both nostalgic and modern at the same time.

We purchased this game on Steam (for Linux, duh) for $14.99 US with a typical small weekend Steam discount triggered by our game watchlist. It was well worth it; Aragami gave us about 8 - 10 hours of main story game time with a single, individual player (did we mention this also a co-op game?).

Aragami, a vengeful ninja spirit with the power to manipulate shadows, is the main player character summoned from the dead by the radiant Yamiko (a handmaiden who can only be described as the secondary main character). She is imprisoned in the city fortress of Kyuryus or the trope goes, “in another castle." 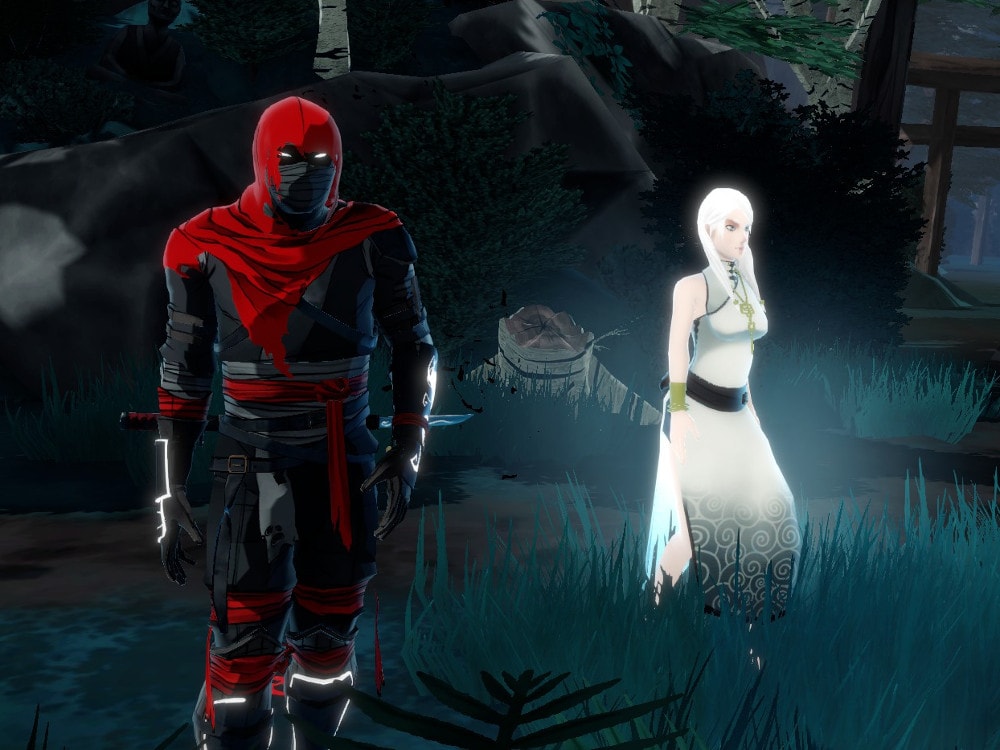 You are set upon the world against Clan Kaiho's army of Light to free Yamiko thankfully by any violent skill you possess or can learn along the way. Very quickly it is revealed both characters' history and future are closely interwoven in a Yin/Yang-like relationship.

We played our game on the hardest available difficulty which was thankfully unlocked by default without having to earn it as a play-through "reward." This setting asks for no quarter and none is given with [nearly] absolute, instant AI kills when spotted; the player is all but forbidden from direct action against enemy counterparts.

Aragami becomes a true test of your predator methods where critical and tactical planning is much more lethal than strong-arming the opponents with overwhelming force. This is the game's strength and is also the stealth genre in general; you are both powerful and weak simultaneously, having god-like abilities yet remain fragile and vulnerable (especially when being hunted). Casual gamers will not like this game and despise the hardest difficulty settings. We, on the other hand, loved the challenge.

Most of the plot is revealed through anime cut scenes but the gritty details of the story are obtained through scrolls found in-game among various locations, shrines and even homes. The Kaiho's soldiers come to life in this way and feel individually realized as if in manga. Once these documents are found, you are provided skill points to unlock deadly tools to use against the enemy (reminiscent of Dishonored or even BioShock).

There are three tiers that comprise static, defensive and offensive capabilities; Shadow, Demon and Ghost. Corpse Vanish (hides bodies) is needed early on and Kunai (dagger throw) is extremely helpful against long-sighted foes. Kurosuna (shadow dragons) replenish special skills while removing bodies whereas Shinen (shadow vortex traps) can be placed for patrols. We beat the game without really using the other skills or even having them available to us.

Controls (again using the Xbox 360 controller and official MS dongle referenced in our Apotheon review) were completely supported on Ubuntu Mate 17.10 in Steam through Lutris; we were pleasantly surprised that no control modifications were required and the key mapping felt natural and familiar. A tiny and forgivable oversight but one that is sure to be noticed at least using MATE is the task bar launcher is missing the game's icon. The game banner in Lutris is perfect however and no other graphical issues were observed. 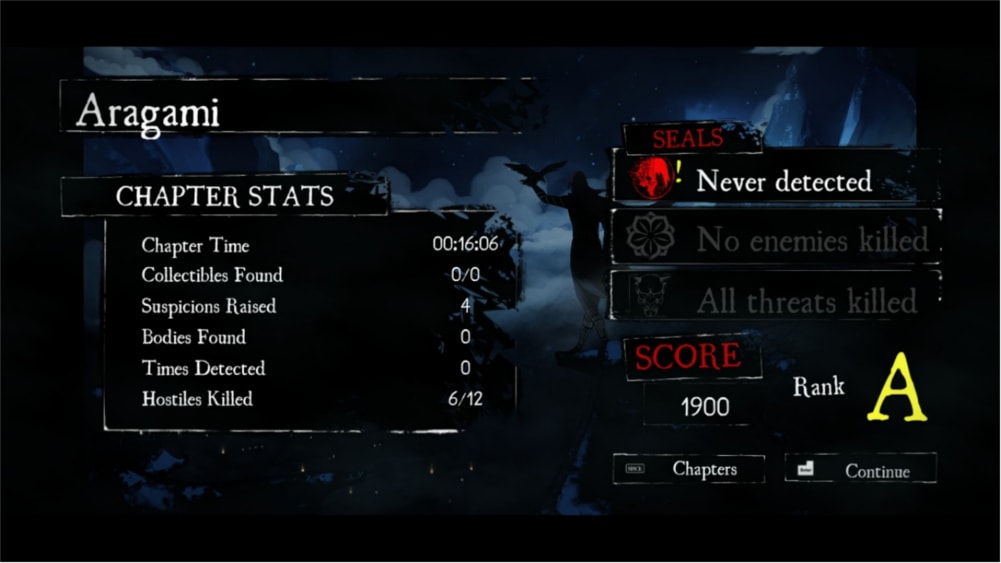 A chapter statistics summary appears after it is fully completed. You are literally graded on your performance; how many times you are seen, how many guards you deceived, how many kills, how many were left alive, if no kills were taken, how many scrolls were found and more. There are several ways to play this game at any given time and you can see just how successful are you at being a complete ghost or an unseen blood-soaked demon-vigilante. At times we imagined this is how Ryuk, from Death Note fame, must feel. Then again we were often stopped in our tracks abruptly by surprise guards or unforeseen enemy signals.

The art style of Aragami is satisfactory; part cell-shaded, part low-poly and part anime. The items and plot-related materials are artistically developed while everything else is suggestively detailed or reused in less critical areas (some trees, rocks, buildings meshes) to keep the game running fast and smooth. The screenshot below is beautiful; and so are the weather transitions.

The generic enemy character skins however are blatantly reused everywhere and might as well be wearing Star Trek TOS' original security redshirt uniform. We understand the technical and hardware limitations behind this decision as GFIST has developed a few kisoks and simulators over the years but this game should have included more enemy aesthetic variety. Important NPCs are thankfully developed with their own skins and look great; the officers, captains and others we won't name for spoilers' sake.

Two Feathers Studio did an overall great job of making the player feel as if they were part of this universe and really incorporated the emotional states of the plot. The sound effects are great. Little details like how a bambo water fountain clunks and splashes or how the juicy thumps of a sword plunged into a chest make this game even more enjoyable. One criticism; we found the danger music a little repetitious but that might say more about our gameplay than anything else.

The dialog in the game is Japanese-like but not actually Japanese. Subtitles are in English as expected from an anime game. The default language should have been Japanese, no exceptions. Its close enough for an American or other English speaker for the impression but this seems a little insensitive to Asian cultured gamers. I’m sure the developers could have found a translator for this task even pro bono.

One thing Aragami absolutely blasts out of the park is the attention to the magical nature of its setting. The plot is wonderfully helped along by the myths and legends of both ancient China and Japan including the timeless stories of the Nine Tails and/or Kitsune with multiple references to Su Daji. 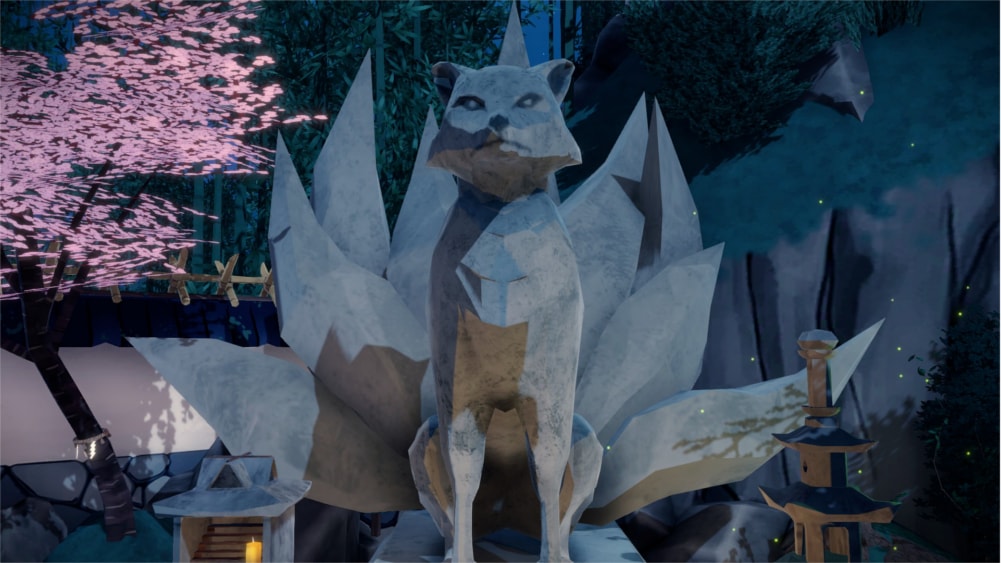 The environment, architecture and level design are not quite of this world but places the player in a dreamy Shogunate full of magic and strife. According to Lince Works themselves getting this atmosphere was very important. They state,

The noun ‘Aragami’ is formed by 2 kanjis, Ara 荒 (violent, rage) and Kami 神 (spirit, god); and that became our way to represent the undead (violent) spirit that is our main character. His sword is ‘hebi’, with the symbol of a snake (hebi). You obtain your sword on a temple under a statue of an eight-headed snake (Yamata-no-Orochi). Those are just examples of Japanese mythology references in the game.

There are several technical criticisms matching other reviews of this game: 1) Camera panning would swing through walls and building exteriors in tight areas, 2) there are no less than three shadows that will trap the player (an awning, a bench, a rock) to force a manual checkpoint reload, 3) inconsistent enemy sight within completely shadowed areas that seemed beyond range of perception and 4) exterior lighting will sometimes shift from night to day when entering or exiting some interiors spaces.

Considering the huge number of shadowed areas in this game it was shocking not to find more bugs. On that subject and a real gift to the player, there is liberty in most of the dark spaces and several sub-routes can be discovered around main obstacles or environmental traps even if skills are undeveloped or guards block your obvious path.

Water could have been a little better both in terms of animation and interaction. Touch water, whether it is a raging river in a huge gorge or a chest-level ornamental brook equates instant death to the player. It is our strong opinion that deep water should simply kill you but shallow water that is less than human height should be accessible to the player.

These issues however are by no means game-breakers and Lince Works should be very proud of what they accomplished with Aragami overall, especially that there is a custom map maker with the Steam version! We sincerely hope there is a sequel and anticipate such an announcement.

Did you find this game review helpful? Did you experience something else than what we described? Have another Linux game you'd like to see reviewed? We'd love to know; please leave your comment below.